Changes to the Voluntary Correction Program

The Voluntary Correction Program (VCP) is available to qualified retirement plan sponsors to obtain IRS approval for proposed plan corrections that — if not addressed in a timely fashion — could result in the loss of the plan’s tax-favored status or substantial sanctions for noncompliance. By submitting a written proposal to the IRS along with a compliance fee, plan sponsors can bring their plans back into compliance with federal tax law while continuing to provide employees with all the benefits of the plan.

The new fee schedule is in effect for submissions made from February 1, 2016, through January 31, 2017. It is generally applicable for all VCP submissions by 401(k) and 403(b) plan sponsors. To encourage plan sponsors to correct plan “failures” through the VCP, the new fees are reduced for almost all corrections. (Only the fees for plans with 101 to 500 participants remain unchanged.) 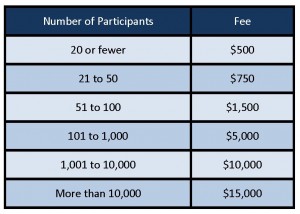 In addition, plan sponsors should continue to refer to IRS guidance contained in Revenue Procedure 2013-12, as modified by Rev. Procs. 2015-27 and 28, for additional information on VCP fees and eligibility for reduced fees for certain submissions.*

The VCP applies to many types of qualified retirement plan failures, including the failure to restate a plan. The IRS requires that all preapproved plans, including master and prototype plans, as well as volume submitter plans, be restated once every six years.

The second six-year restatement cycle for preapproved defined contribution (DC) plans — known as the “PPA restatement” because many of the changes are required by the Pension Protection Act of 2006 — ended on April 30, 2016. Any preapproved DC plans that missed the restatement deadline are no longer in compliance. For them, a PPA document must be adopted and the plan sponsor must make a VCP submission to the IRS with the appropriate fee. Note that if you submit under VCP by April 30, 2017, the fee will be discounted by 50%.

* Internal Revenue Service, “Changes to Voluntary Correction Program Compliance Fees, Including Reduced Fees for Most 401(a) and 403(b) Plans,” January 6, 2016